Robert Olson has worked as a facilities painter at San Jose State University for the last 18 years. He has been an active member of Local 2010 since the Teamsters began representing members on his campus about five years ago.

Robert’s job is to take care of the university. Besides painting the vast facility that includes 32 buildings and a new football stadium, he and his three co-workers also do drywall and stucco work, scaffolding, and lead and asbestos abatement, when needed.

“I work here because of the benefits; this job pays the bills. I was a single parent for three years and later I was able to put my daughter through university because of it,” he says. “Ever since the Teamsters took over, I’ve gotten raises and income that enables me to take care of my family. We got our highest raise ever with the last contract.” 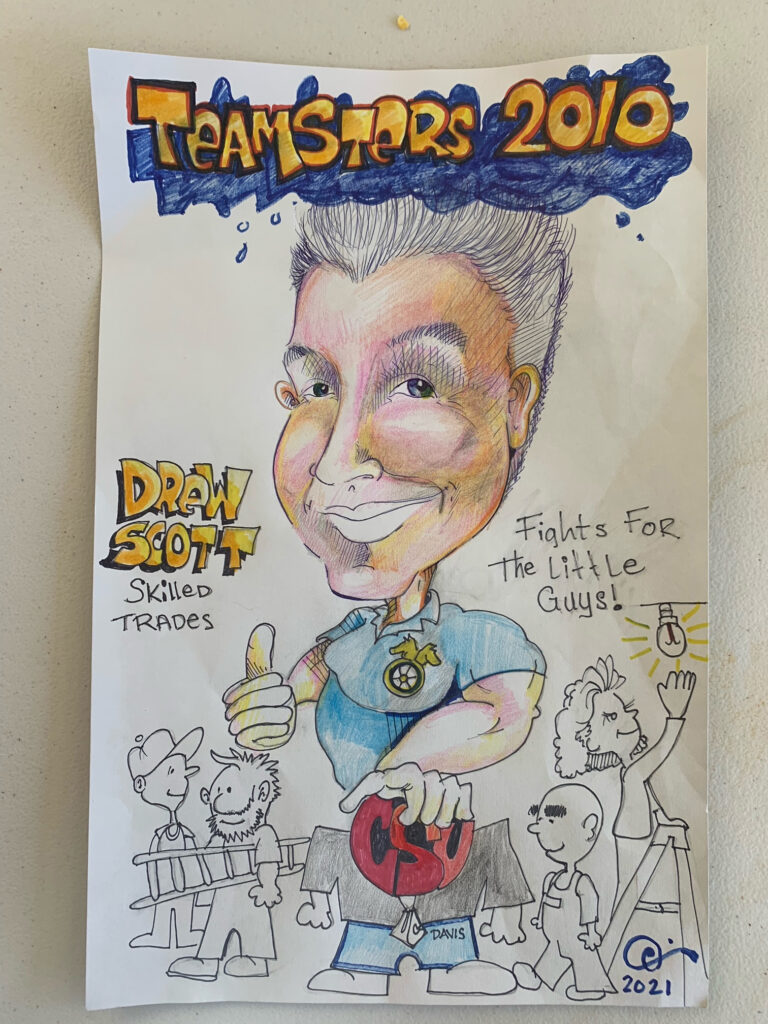 Robert, an artist, also does the graphics on campus, painting lettering and logos. “I like taking care of the music, art, and athletics departments here – that’s where my passion is. This is a great university; I don’t always agree with management and the way it’s run…but that’s why we have a union.” Robert created this caricature of Drew Scott, Local 2010’s Director of Skilled Trades, a talent he gained working at Six Flags.

Since the Teamsters came to the campus, Robert has served as one of four stewards on the CSU-San Jose campus. “I help out, file grievances, take care of people when they need it. I point out when there are safety hazards. In fact, I was just reprimanded for doing that…” He has also worked on the bargaining team for the CSU negotiations.

“I got involved because I wasn’t being treated fairly. I took on management and won,” he says with pride. “Then other members started coming to me for help and advice. The union asked me to become a steward and they got me trained,” he says. “I love that the union trains us and helps us to learn about our rights to work and to work safely. And they back us up with management to help make that happen.”

Robert says that he tries to educate the other members, leaving books and flyers in the paint shop. “Especially in this time of voting, I’ve worked to get out the vote. Public sector workers need to be more involved in how our union will look and work in the future,” he adds.

To Robert, being involved in the Teamsters is not about “What are you going to get me,” but rather, “it’s about what we can do together to get fair pay, safety, and more.” Most important, he says, “it’s nice knowing someone out there has my back.”