It’s not unusual for California State Senators and Assemblymembers to encounter Joint Council 7 Teamsters standing shoulder to shoulder along the halls of the State Capitol or having them cram into their tiny legislative offices. In fact, senior legislators and staffers will tell you that JC7 has been a major lobbying force in Sacramento for decades, whether it be introducing new legislation, supporting existing legislation or protesting anti-labor policies.

It is, however, extremely rare when our loud and powerful voice demands that legislators do nothing.

That’s exactly what took place on August 13, 2018 when scores of Teamsters representing many Locals from throughout Northern California joined with the California Teamsters Public Affairs Council, State Building & Construction Trades Council and the California Labor Federation to demand that legislators not allow major corporations to fast track anti-worker legislation through either house prior to recessing on September 1, 2018.

At issue is what’s commonly know as the “Dynamex decision,” an April 30, 2018 unanimous ruling by the California Supreme Court which established a standard known as the “ABC Test,” aimed at putting an end to the misclassification of workers as “independent contractors” when, in reality they are employees.

The “ABC Test” puts the burden of proof on the employer to prove that a worker is truly an “independent contractor” by establishing all three of the following:

B). That the worker performs work that is outside the usual course of the hiring entity’s business;

C). That the worker is customarily engaged in an independently established trade, occupation, or business of the same nature as the work performed.

Why is the Dynamex decision critical to workers? 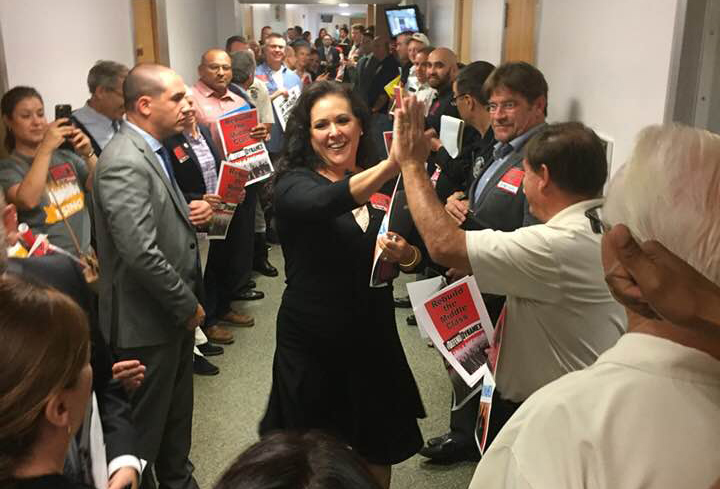 According to a July 23, 2018 letter from the California Labor Federation to Speaker Rendon, Pro Tem Atkins and Governor Brown:

“The independent contractor is not entitled to minimum wage, overtime pay, sick leave, or protections from discrimination, harassment, or retaliation. In many cases, he or she is subject to the employer’s rules and rates but receives none of the rewards of employee status. When workers classified as independent contractors want to join together to improve their working conditions, they are barred by federal anti-trust laws from organizing into a union.”

Of course, contractors and big business, including “gig” giants Uber and Lyft, are up in arms over the Dynamex decision. They are currently waging an all-out collective assault on the legislators, hoping to find some way to stall, eliminate or overturn the implementation of the court imposed standards before the start of the upcoming recess.

Based on the responses Teamsters received while visiting the offices of Democratic legislators, there is little chance that corporate aggression will prevail in attempting to prevent the implementation of the Dynamex standards. Let’s hope so.

Our success in the halls of the State Capitol is a result of Teamster persistence, honesty and hard working lobbyists who keep an eye on things for us. And, of course, when we speak of Teamster success, we have to mention JC7’s Political Director Doug Bloch … nobody better.

So, don’t let the corporations, politicians or union busters tell you any different, JC7 will continue protecting our members, whether it be at the State Capitol, city hall, the workplace or in the streets. That is our history, and we are here to stay.