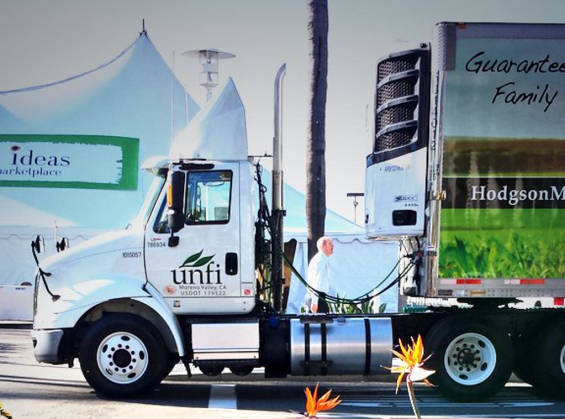 The 31 drivers based out of Gilroy, Calif., transport supplies for UNFI to major clients like Whole Foods, Amazon, Genentech, Sprouts and Google.

The drivers are seeking fair scheduling and compensation for excess hours, seniority for overtime, improvements to safety and a shorter wage progression, among other gains.

“We’re excited to welcome UNFI drivers to the Teamsters. There is a trend across the country of UNFI workers joining together and seeking Teamster representation,” said Dennis Hart, Secretary-Treasurer of Teamsters Local 853. “As companies become increasingly interconnected, as with Amazon’s purchase of Whole Foods, it’s important that unions strategically organize and workers unite to better their working conditions.”

Teamster UNFI members from Local 63 in Covina, Calif., and Local 117 in Tukwila, Wash., traveled to meet with the UNFI workers in Gilroy last week, to provide support and share their experiences with organizing and forming their union with the Teamsters.

“Our thanks go to all the UNFI workers who reached out to their fellow UNFI workers, and to the Teamsters Warehouse Division Director Steve Vairma for his support and leadership,” Hart said.

“UNFI is the sixth largest grocery wholesaler in the U.S, and first in the organic and natural sector. The perseverance and commitment exhibited by UNFI workers is an example to all workers on what can be achieved by sticking together. We’re looking forward to continuing to represent and organize more workers in this sector,” Vairma said.

The Gilroy drivers’ victory comes in the wake of a growing string of victories for workers at UNFI all over the country who are building Teamster power.

The office personnel at UNFI’s Moreno Valley distribution center recently ratified their first union contract. They are members of Teamsters Local 63, which also represents drivers at the center. The drivers led a long fight to organize and ratified their first Teamster contract in May 2016, resulting in substantial improvements.

Warehouse workers at the same Moreno Valley distribution center also voted to join the Teamsters, becoming members of Local 166 in May 2017. They are currently bargaining with the company for their first contract.

UNFI workers represented by Teamsters Local 117 in Auburn, near Seattle, made great gains in June 2017 when they ratified a contract which included a pension for the first time.

UNFI warehouse and production workers in Iowa at Local 238 and New Jersey at Local 810 also ratified contracts in the summer of 2017.