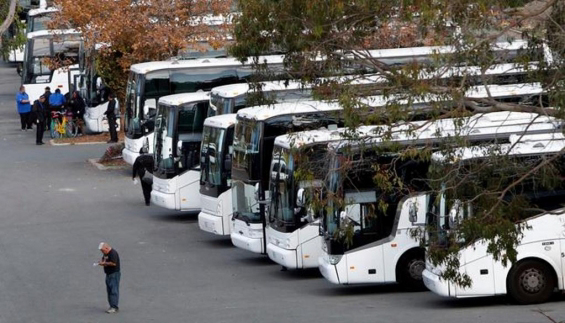 (SAN FRANCISCO—DECEMBER 12, 2017) –– The Teamsters Union applauds the passage of a commuter shuttle policy by the Santa Clara County Valley Transportation Authority (VTA) that will enhance safety and transportation planning. The policy will benefit transit and shuttle passengers, as well as thousands of Teamster drivers who operate tech commuter shuttles in the county.

The policy passed unanimously by VTA includes a permitting program for high tech company shuttle buses that use public bus stops. Under this program, shuttle bus companies for high tech companies like Google and Cisco will need to integrate with VTA transit planning to ensure the smooth flow of traffic and mitigate congestion. The companies will also be required to submit service disruption plans in the event of labor disputes.

“We can’t do our jobs effectively without clear guidelines. Right now, there’s confusion between the buses the VTA operates and the tech shuttle buses that we drive. This policy will help me as a driver to know the rules, like where I’m supposed to stop my bus and for how long. I’m pleased that we are now going to have clarity,” said Rosie Silva, a member of Teamsters Local 853.

“The service disruption plan is important for VTA bus drivers and passengers as we will be in contract negotiations with three shuttle bus providers serving most of the major high tech companies in 2018,” said Rome Aloise, President of Teamsters Joint Council 7. “Some companies like Google continue to contract with nonunion companies. Google’s problems shouldn’t become VTA’s problems.”

Santa Clara is the fastest growing county in California, with a projected 2 million residents by 2030. Google announced plans this year to build a new campus in San Jose that will employ more than 15,000 workers.

More than 1,000 tech commuter shuttle drivers have joined the Teamsters since 2015 at Facebook, Apple, Yahoo and more than a dozen other tech companies. The union has negotiated industry-leading contracts for organized tech industry workers.

The Teamsters Union is part of a growing movement of labor, faith and community-based organizations and workers challenging income inequality in Silicon Valley through an innovative partnership called Silicon Valley Rising. For more information, visit: http://siliconvalleyrising.org.