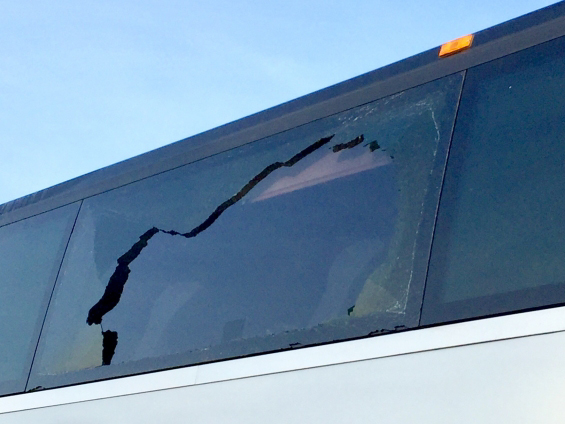 (SAN FRANCISCO—January 18, 2018) –– Teamster shuttle bus drivers safely navigated through an apparent pellet gun attack on commuter shuttle buses this week along Highway 280. Buses sustained damage in the attack, but there were no reported injuries to the drivers or passengers.

“We take the safety of our members and their passengers very seriously,” said Dennis Hart, Secretary-Treasurer of Teamsters Local 853 in Oakland. “We are working with the employers to ensure that everyone stays safe.”

Apple has announced its buses will be rerouted away from Highway 280.

There is no apparent motive for the attacks. High-tech companies have come under criticism locally for contributing to a housing affordability crisis in San Francisco. High-tech commuter shuttle contractors, meanwhile, employ thousands of professional drivers who have raised standards over the past several years by organizing with the Teamsters.

More than 1,000 tech commuter shuttle drivers have joined the Teamsters since 2015 at Facebook, Apple, Yahoo and more than a dozen other high-tech companies with the exception of Google. Teamsters form the majority of shuttle bus drivers serving high-tech companies in Silicon Valley. The union has negotiated industry-leading contracts for organized tech industry workers, bringing them into the middle class with good wages and benefits.

The Teamsters Union is part of a growing movement of labor, faith and community-based organizations and workers challenging income inequality in Silicon Valley through an innovative partnership called Silicon Valley Rising. For more information, visit http://siliconvalleyrising.org.