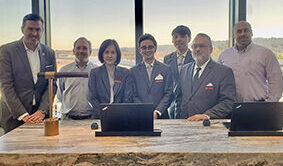 In February, front desk and reservations employees at the new Grand Hyatt at SFO voted to form a union with Teamsters 856–joining the over 1,000 hospitality workers already represented by the 17,000-member strong local.

The Grand Hyatt at SFO opened its doors last fall and is the only hotel on the San Francisco International Airport’s property.

This win is another victory for the Teamster Organizing Network–a coalition of Teamster Locals across California and Nevada whose goal is to help working people gain a voice on the job and build Teamster power in core industries.

“We welcome workers from the Grand Hyatt at SFO to our union and look forward to getting to the bargaining table to negotiate their first Teamster contract,” said Local 856 President Mike Lagomarsino.

On the day cards were counted at the hotel, Assemblymember Kevin Mullin (District 22) was present to verify the tally and announce that the employees had authorized Local 856 as their exclusive bargaining representative.

“Not only do Grand Hyatt at SFO workers join over 1,000 hotel employees represented by our local, they also join thousands of Teamsters 856 members who serve the traveling public at SFO working in aircraft maintenance and customer service at airline carriers and car rental companies,” said Local 856 Secretary-Treasurer Peter Finn. “The addition of these workers to our local proves that SFO is truly Teamsters 856 strong.”