In February, the shuttle bus drivers at two more companies that have contracts with WeDriveU are now part of the Teamsters master contract, reports Business Rep Tracy Kelley. Four of the new members drive for VMWare in Menlo Park, and five are drivers for the Stanford Research Park.

Kelley reports that these members had been earning the union wage, but now that they’re members, not only do they have union protections and increased leave benefits, but also their health care cost is reduced significantly to $11/month, and the company will be making 401K contributions on their behalf for the first time.

JC7 Statement on the recent racist murders in the U.S.
Acknowledging the value of garbage collectors gains one member national attention 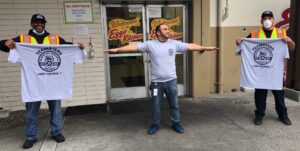