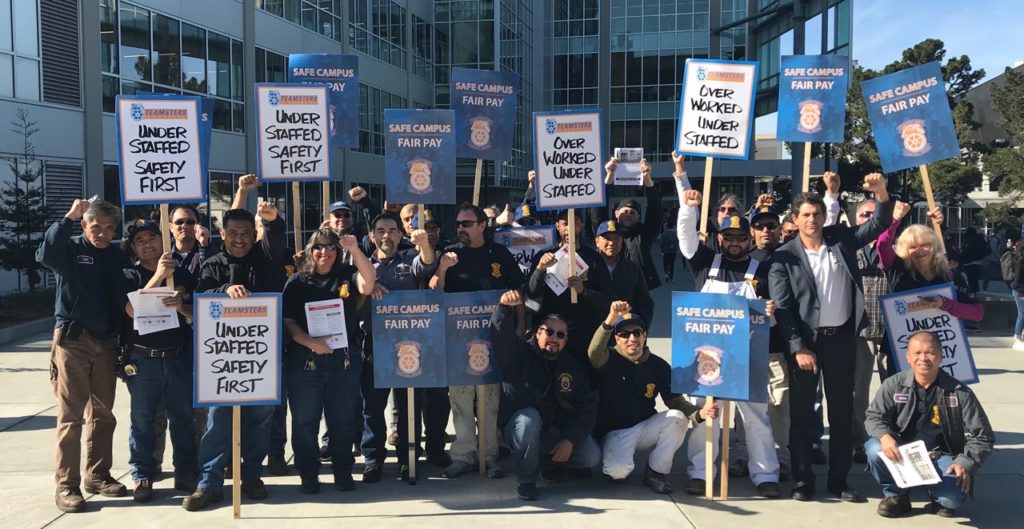 Skilled Trades Teamsters at San Francisco State and other campuses take part in a statewide protest at California State University.

Hundreds of Skilled Trades workers across the California State University system held protests on Tuesday, January 23, to call attention to the threats to students caused by years of neglect of campus facilities.

“CSU raises tuition, but fails to invest in student safety and the safety of the workers who make the university run,” said Jason Rabinowitz, Teamsters Local 2010 Secretary-Treasurer. “It’s time for CSU to fulfill its promise to the people of California and provide a safe environment for students and workers.”

Inadequate funding has resulted in a backlog of system failures and facilities past their useful life, according to CSU’s own reports. At many CSU campuses, the utilities infrastructure is obsolete, dating back more than a half century and in need of upgrade or replacement. This results in power or water service interruptions and failures, which threaten to interrupt education services to students.

“Our members— electricians, carpenters, plumbers, and other skilled trades workers—work hard to keep the universities running and we take pride in our work,” said Hector Fernandez, Teamsters Local 2010 Director of Skilled Trades. “But we are overworked and understaffed, putting us and the students in danger.”

In a recent survey, more than 63% of CSU skilled trades workers, whose job it is to maintain and repair university facilities, reported being aware of unsafe conditions or accidents due to deferred maintenance and understaffing.

“I just want what everyone wants,” said Curtis Maas, a carpenter at Chico State. “I want to be safe in the workplace and be paid a fair wage for work that I do.”