It’s been ten years since Rome Aloise was elected president of Joint Council 7, merging it with Joint Council 38. The merger created one of the largest and most powerful Teamster organizations in the U.S., covering critical industrial and political power centers including Sacramento, San Francisco, Silicon Valley, and the nation’s breadbaskets of the Central and Salinas valleys.

Since that time, Joint Council 7 led on so many issues vital to defending and rebuilding worker power in California and throughout the country.  Our work has been recognized by numerous local and statewide organizations, winning awards and regular press coverage.

Looking back, it seems we had a crystal ball for the times we find ourselves in now.

The laws we pushed for changed workers’ lives

Last year we went all-in to pass AB5, legislation which established a strict new test for employee classification in California.  The issues around misclassification are at the forefront in this pandemic, with hundreds of thousands of so-called “independent contractor” drivers finding themselves excluded from the social safety net.  Without health insurance, unemployment insurance, or any other legal protections, hundreds of thousands of workers in California find themselves left adrift.  The federal government stepped in to provide “Pandemic Unemployment Assistance” for workers excluded from state unemployment insurance.  While this sounds good, it’s really our tax dollars going to bail out the trucking and “gig economy” companies who don’t pay into unemployment, while every Teamster employer pays.  This subsidy is all the more outrageous given the fact that Uber, Lyft, DoorDash, and PostMates have invested $110 million in a measure for the November ballot to exempt themselves from AB5.

One powerful example of this issue comes from San Francisco, where Joint Council 7 pushed the Board of Supervisors to pass a resolution requiring e-scooter companies to convert their workers from independent contractors to employees after AB5 passed.  Spin was the first company to do it, and the workers joined Teamsters Local 665.  Together they negotiated for three months’ pay and health care after the company shut down operations when the shelter-in-place order happened.  The workers at Bird signed cards to join the Teamsters, but the National Labor Relations Board shut down all elections.  Last week, the Bird workers were laid off in a 2-minute Zoom call.  Workers want and need unions now more than ever.

Misclassification is only one scheme employers have come up with to weaken worker power and cut costs.  Subcontracting and temp agencies are another.  So is exploiting immigrant labor.  Led by fierce organizing campaigns from Joint Council 7 locals, we passed the strongest laws in the country protecting immigrant workers from retaliation when they speak up for their rights.  We did the same with a state law holding employers jointly liable when their subcontractors break labor laws.  We rewrote the national joint employer standard, catapulting our work to the top of the national Chamber of Commerce’s hit list.  We took on Silicon Valley – long a fortress against unions – and thousands of subcontracted bus drivers joined together in the Teamsters union.  This raised wages for every bus driver – public and private – throughout the entire Bay Area.

COVID-19 has shown how immigrant and subcontracted workers in food processing plants, Amazon and other warehouses are more vulnerable when they don’t have a union. Here at Joint Council 7, we mourn the death of brother Pedro Zuniga who worked at the Safeway distribution center in Tracy.  More than 50 other members tested positive at the Tracy center, threatening the entire food supply chain in Northern California, Northern Nevada, and Hawaii.  Local 439’s leadership pushed Safeway to make important changes in the warehouses, but our work didn’t stop there.  Using the political relationships we’ve developed, we contacted the Newsom administration, bringing in Cal-OSHA and the California Department of Public Health to push for stronger protections for our members.  That’s why we do politics and that’s why workers need unions.

The COVID-19 pandemic has exposed another issue the Teamsters have led on, which is a reinvestment in public services.  Every day, Teamster public employees show up and do the important work of providing vital services, yet they do it for underfunded government agencies.  We fight for more – sometimes scraps – during every contract negotiation.  The systematic shrinking of government has been coupled with an explosion in corporate profits, boosted by tax breaks, subsidies, and offshoring.  Without corporations paying their fair share, public services and infrastructure investment keep falling behind.  This will only be worse post-pandemic, as we fight concessions at the bargaining table and cuts in services.

What has this meant for workers in the pandemic?  Decades-old computer systems at the state’s Employment Development Department have crashed, leaving people unable to apply for unemployment.  The department had to hire thousands of workers to deal with the rush.  The federal Occupational Safety and Health Administration (OSHA) – the agency tasked with protecting worker health and safety – has only 862 inspectors for the whole country.  That is the lowest number since 1975.

The Joint Council has partnered with other labor unions on another issue that is front and center right now: health care.  Our work has focused mainly on lowering costs, but the pandemic reveals the need to invest money back to the workers, including personal protective equipment, staffing, training, and education.  People cannot afford to live without health insurance, yet many cannot afford quality insurance.  Medical debt is a major cause of bankruptcies, yet health care and drug industry profits skyrocket.  Many believe it’s time for a real and robust discussion about whether health insurance should continue to be tied to employment.  No matter where you fall in that debate, it’s clear that the current system is not working well for most people.

The future of work

The health care question is only one big question.  Last year I was honored when Governor Newsom appointed me to the California Future of Work Commission.  Over the course of several months, we studied the direct relationship between the decline in unions and an increase in income inequality.  We looked at how this hit people of color and women even harder.  We discussed the need to make it easier for workers to join unions.  We looked at the rise in monopolies (only one seller) and monopsonies (only one buyer) – Amazon being a prime example (no pun intended) – and the need for anti-trust action to break them up.  We documented the billions of dollars the state hands out to employers every year and pushed for labor standards so that we support employers that create good jobs – and cut off those that don’t. We pushed for stronger enforcement of existing labor laws.  We established the need to make sure workers have a voice when new technology is introduced on the job.  We agreed that technology should augment work, not automate it.

After all this work, the Commission was set to issue recommendations later this spring.  But that was for a future of work that doesn’t exist anymore.  We never imagined a future like this one.

Even when shelter-in-place restrictions get lifted, we are looking at estimates of 25% unemployment in this country.  Low-wage occupations will have even higher unemployment.  Already we’ve seen entire industries get crushed, including many where Teamsters work or deliver products.  These include hotels and hospitality, restaurants, parking, rental cars, and other airline-related jobs.  The list goes on.

The last time we had unemployment this high was during the Great Depression.  With 25% of the country unemployed, workers took to the streets demanding the right to legally organize unions, the 8-hour workday, overtime, social security, and an end to child labor.  Before the Depression, these ideas were considered too radical by members of both political parties.

Worker action – spurred by the rough economic times of the Depression – changed all that.  In 1934, Teamsters in Minneapolis led city-wide strikes that erupted in violence, including the “bloody Friday” incident where two Teamsters were shot by police and 65 others were injured.  The Teamster strikes paralyzed the city as hundreds of thousands marched, and ultimately the great sacrifices paid off as we won the strike and all of our demands. 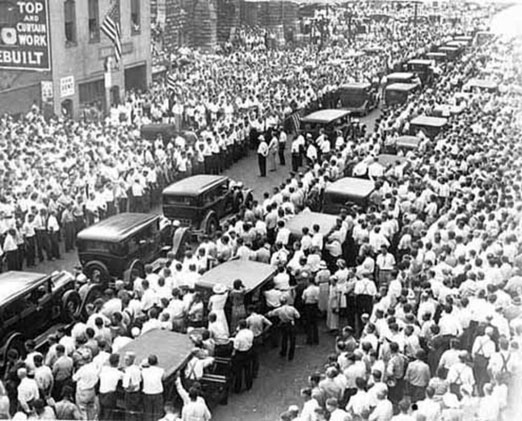 Workers across the nation watched the Teamsters and recognizing the threat this posed, in 1935 Congress passed the National Labor Relations Act, creating a legal way for workers to join together in unions and collectively bargain.  The next year, hundreds of thousands of workers in Michigan’s auto plants began a series of sit-down strikes that led to the growth of the United Auto Workers. This paved the way to the largest growth of union organizing in US history and a growing middle class and prosperity that lasted for decades.

In 1935, Congress also passed the Social Security Act, giving all workers guaranteed retirement income for the first time in US history.  In 1938, they passed the Fair Labor Standards Act, establishing the 8-hour workday, overtime, and the end of child labor.  The federal government also invested in jobs. Through the Civilian Conservation Corps, the Works Progress Administration, and other efforts, our tax dollars put millions of Americans to work.  These efforts built roads, bridges, schools, libraries, and more infrastructure that we still rely on today.

The sum of these packages was called the “New Deal.”  So, with the economic fallout from the COVID-19 pandemic, is it time for a new “New Deal”?  Should we try and rebuild the system the way it was or make changes?  Should we revisit the way workers join unions or get retirement and benefits?  Should we reinvest in jobs and infrastructure?  How should we pay for it and what share should corporations pay?

Finally, what role will workers play in answering these questions?  We saw what happened when workers stood up last time. Are we going stand up again?  Will we stay united as Teamsters and fight?  When we fight, WE WIN!