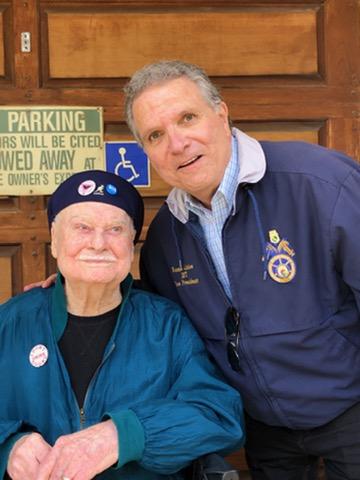 On June 25, activists from across the west coast rallied and marched in the Castro neighborhood of San Francisco to honor and celebrate the contributions of retired Teamster Allan Baird. The 89-year old activist played a crucial role in labor and LGBTQ+ history. From serving as a president of the newspaper delivery drivers’ union to organizing the Coors beer boycott alongside the gay leader and future San Francisco Supervisor Harvey Milk and activist Howard Wallace, Baird has been a key leader in the fight for justice and equality in the city, state, and nation.

After serving in the army in Korea, Baird returned to his hometown of San Francisco and, in 1956, began working as a newspaper driver. By 1962, he was elected to his first leadership position in Teamsters Local 921, (since merged into Teamsters Local 853). He later served as a business representative and union president.

In 1973, Baird was asked by the regional leadership of the Teamsters to take charge of Teamsters Local 888’s prolonged strike (and fledgling boycott of Coors Beer) against a group of Bay Area beer distributors. The campaign involved reaching out to Black, Latino, Arab American, and Gay and Lesbian organizations to ask for support. While this effort proved to be a challenge, Baird did not give up. Instead, he built coalitions with communities across the Bay Area using uncommon strategies, such as advocating for an affirmative action hiring program within the union, picketing alongside United Farm Worker protesters, and getting beer delivery jobs for openly gay men and lesbians. Baird also used his leverage to get labor support issues of concern to the gay community. At one point, Baird gave his megaphone to activist Harvey Milk and it ended up in the Smithsonian Museum.

“The significance of bringing together a coalition of Teamster Local Unions in the Bay Area with the LBGTQ community cannot be overestimated,” recalls Joint Council 7 President Rome Aloise, who attended the event. “The Local 888 beer strike was the impetus. Prior to this, the Teamsters acted as if they didn’t need the support of anyone but their members but this effort made Teamster leadership realize that coalition building was a necessary and powerful method to help their members. The LBGTQ community brought Coors Beer to their knees—this helped the Teamster drivers while taking on the ultra-conservative company. I watched Teamsters and members of the LBGTQ community working in concert, leafleting and picketing bars and liquor stores. At the time, it was a sight to behold.”

Aloise continued, “Allan Baird, along with Harvey Milk, brought this all together. As I said at the celebration for Allan, the Teamsters are forever in his debt for opening our collective eyes, and we will continue to return the favor long into the future.”

After the Coors boycott ended in 1975, Baird remained committed to social justice, helping with Milk’s campaigns for supervisor over the years. Their friendship was memorialized with Baird’s cameo in Gus Van Sant’s 2008 film, Milk.