About 500 Teamsters came to the UPS/San Francisco building on February 23 to protest the wage cuts for part-timers. 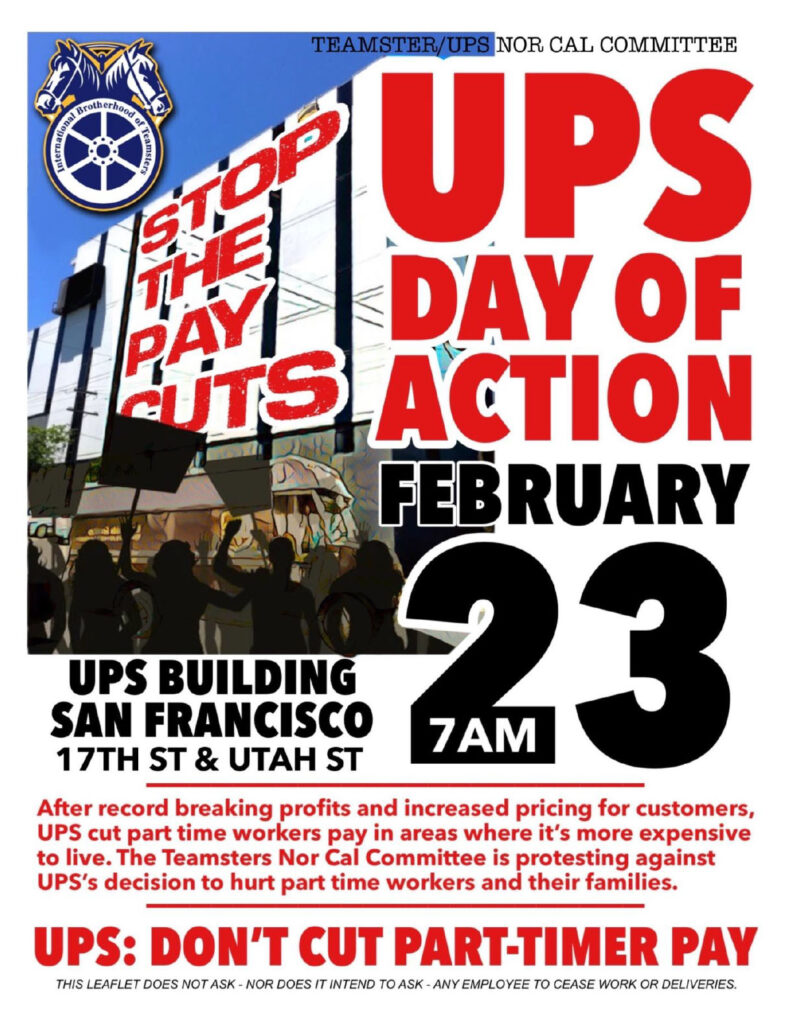 On February 23, over 500 Teamsters from across Northern and Central California came together at UPS’ San Francisco building to protest the company’s decision to slash wages by up to $6/hour for part-timers. The event was sponsored by the Nor Cal Teamster UPS Committee and Teamsters Joint Council 7.  UPS workers and Teamster supporters came from across the Bay Area and as far as Fresno, Watsonville, and Sacramento.

“This company recorded record profits in 2021, said Peter Nuñez, Chair of the Nor Cal Teamsters UPS Committee. “They raised prices on their customers in 2021. What did they do in 2022? They reduced the wages of their already lowest-paid workers.” He added that the $6/hour pay cut comes out to about $5500/year. “It probably doesn’t sound like much to UPS CEO Carol Tomé, who makes millions, but it’s pulling the rug out from under thousands of families.”

“Our members have been working through this pandemic to keep UPS running, made them billions in profit, then they turn around and slash the lowest-paid workers – it’s disgraceful,” said Jason Rabinowitz, President of Teamsters Joint Council 7.  “We are gearing up for a fight when we bargain our next contract with UPS. We are going to have to stand together as Teamsters and force UPS to be fair to workers, and that’s what we are doing today”

State Senator Scott Weiner was joined on stage by several San Francisco Supervisors, including President Shamann Walton, Rafael Mandelman, Dean Preston, and Aaron Peskin. They all pledged that they will stand up for and with the workers and speak strongly against the pay cuts. “We are in the middle of a pandemic and your wages are being messed with. That’s something we’re not going to stand for,” said Walton. “We’ll stand with you to tell UPS that you cannot play games with people’s salaries or their livelihoods.”

Part-timers Elsa Torres (Local 2785—San Francisco), Melissa Castro, and Yvette Osuno (both from Local 853—Sunnyvale) talked about their experiences. Melissa and Yvette are struggling single mothers who both have very long commutes. None of them received advanced notice of the significant pay cut.

Rabinowitz explained that while Northern California took the lead with these protests, they’ve been picked up by Teamster locals around the country, including in Southern California and Philadelphia. “We’re Teamsters Rising!”

January Day of Action: Nor Cal and Northern Nevada

Despite making record-breaking profits last year, and recently increasing prices for their customers, UPS cut the pay by nearly $6 per hour of nearly 4,000 part-time workers throughout the area. These cuts come as the pandemic remains a hazard for workers who live in some of the most expensive housing markets in the country.

The Teamsters Union is entering into contract negotiations with UPS later this year. The collective bargaining agreement covers roughly 325,000 workers across America, the largest agreement of its kind in the country. Joint Council 7 unions put UPS on notice with these actions.

“UPS has grown during the last two years with the explosion of online shopping,” said UPS NOr Cal Committee Chairman Peter Nuñez. “During the COVID-19 pandemic, our members worked non-stop to earn the company billions in profits, yet UPS failed to give them hazard pay. Now UPS is choosing to cut part-timers’ pay back to the minimum levels. This is unconscionable.”

Events were held at the following locations, all on the morning of January 27, 2022: