Due to the pandemic, instead of 5,000 Teamsters sitting shoulder to shoulder in a huge Las Vegas ballroom, the 30th Teamster convention was held virtually. While many people watched from their home computers, and some gathered in their Local Union offices, Joint Council 7 pulled together the largest contingent in one place, with about 200 delegates and alternates sitting socially distanced at the Grand Sierra Resort in Reno, NV.

The day before the convention started, Joint Council 7 sponsored a delegates meeting and educational forum that covered the status of the pension and 401K plans; provided an overview of NLRB legal developments; reviewed legislation pending in Sacramento; highlighted the PRO Act; and covered local union cybersecurity concerns.

On June 27, the Reno Joint Council and Unity Convention opened with Dwayne “The Rock” Johnson. “This has been a year like no other. Every day brought fresh challenges and our very concept of normal was turned inside-out. Somebody had to keep the seams from bursting and it was the brothers and sisters of the Teamsters who rose to the occasion, as they always have,” he said. 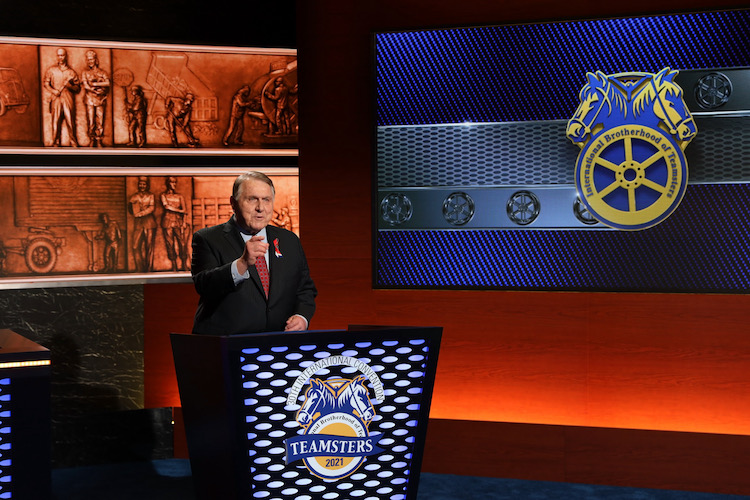 This was the fifth and last convention that James P. Hoffa will preside over. With the theme, “Promises made, promises kept,” Hoffa’s final keynote speech reviewed Teamster successes over the last 22 years. These include the 500,000 workers in numerous industries organized since 1999, getting the government out of the Teamsters’ business by ending the consent decree; saving the pension plans that were in deep trouble; rebuilding a strong strike fund, developing the James R Hoffa Scholarship fund, and much more.

President Joe Biden started his speech to the convention by thanking Hoffa and stating that he and his team are “working to be the most pro-labor presidency in American history,” creating a “blue-collar blueprint to rebuild America.” As he said in closing, “When you’ve got a tough job ahead of you, it’s always a good idea to call the Teamsters.”

A key role of the convention is to pass constitutional amendments. The two slates vying for Teamster leadership positions worked together to shape proposals around eligibility and availability of strike benefits and eliminating the two-thirds rule to reject a final contract offer.

At the last several conventions, the Teamsters have taken on a major organizing target and this year was no exception. Delegates voted overwhelmingly to formalize a resolution to address Amazon’s exploitation of its employees and contractors by committing all levels of the union to unite with core platforms of member engagement, worker and community engagement, antitrust enforcement, policy reform, and global solidarity. The resolution states that the union will “fully fund and support the Amazon Project and supply all resources necessary.” It also calls for creating a special Amazon Division to aid Amazon workers and defend and protect the standards in Teamster-represented industries from the existential threat that is Amazon.

“Amazon presents a massive threat to working-class communities and good jobs in the logistics industry,” said Randy Korgan, Teamsters National Director for Amazon. “The Teamsters have fought hard to create and protect worker standards in the warehouse and delivery industries for more than 100 years while helping build worker power. Amazon workers are calling for safer and better working conditions and with today’s resolution we are activating the full force of our union to support them.”

Finally, delegates had the important task of nominating candidates for the International offices of General President, General Secretary-General, International Vice Presidents, and Trustees.

Both candidate slates handily met the minimum 5% threshold to get on the ballot. While in past years the nomination process was boisterous, in this year’s virtual format, the nominations were written and accepted in advance. The two slates got to introduce themselves to the assembled delegates through video.

“This election for Teamster leadership will set the direction of the union for years to come,” Joint Council 7 President Rome Aloise says. “The most important thing that members can do is also the easiest. Everyone has to vote on their Teamster leadership when the ballots go out in October.”