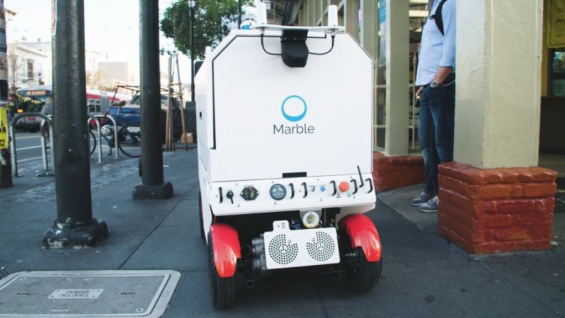 (SAN FRANCISCO—December 13, 2017) –– California Teamsters are applauding the passage of legislation by the San Francisco Board of Supervisors this week that will create a permitting process for delivery robots.

The legislation will allow for companies that are based in San Francisco and have a labor peace agreement to conduct research and development and deploy human-operated robots that will deliver essentials, including groceries and meals. A limited number of the robots will be allowed to operate on the city’s sidewalks.

“We are excited to partner with companies and work with government to pass innovative policy that promotes good union jobs. This is innovation that helps workers, instead of displacing them,” said Rome Aloise, President of Teamsters Joint Council 7.

Teamsters have partnered with Marble, a San Francisco-based company, which will employ Teamsters in the manufacturing and operations of its robots. Teamsters worked cooperatively with Supervisor Norman Yee, who initially proposed an outright ban on these devices, to amend the legislation in a way that addresses both pedestrian safety and worker concerns.

“This is technology that is complementary to and not competitive with workers’ jobs,” Aloise said. “Teamsters started out driving teams of horses, and now San Francisco’s robots will be manufactured and driven by Teamsters.”