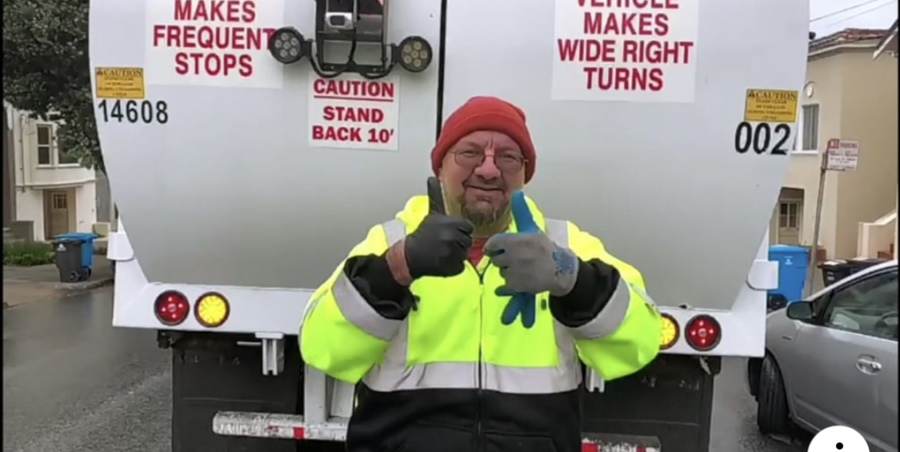 Aaron Meier is rightfully proud to be a garbageman.

Aaron Meier empties about 800 garbage cans every day, rain or shine. He first caught the world’s attention with a series of tweets in mid-March as Americans were just beginning to come to terms with the pandemic and what it would mean for their livelihoods.

“I’m a garbageman, I can’t work from home and my job is an essential city service that must get done,” tweeted Meier, a Local 350 member who works for Recology Sunset in San Francisco. His tweets not only garnered more than half a million “likes,” but got him a segment on ABC’s Good Morning America to tell his story—and that of his fellow workers, who are working through the pandemic.

“It’s a tough job, from getting up pre-dawn to the physical toll it takes on my body to the monotonous nature of the job, at times it’s hard to keep on going.”

He continued: “Right now though, right now I am feeling an extra sense of pride and purpose as I do my work. I see the people, my people, of my city, peeking out their windows at me. They’re scared, we’re scared. Scared but resilient.”

Meier’s hours have shifted even earlier in the morning to limit his exposure to others, but his positivity and sense of duty remain.

“If it doesn’t get done,” he said of his work, “nobody in the city could get their work done because they’d have garbage in their way.”

“It started feeling more important to me — like I needed to help the people of my city — and I’m doing it for them,” Meier added.