In a major arbitration victory announced in November, Local 2785 UPS package drivers are getting justice after a long battle against the company for skimping on drivers’ overtime pay.

The fight began when the local filed a grievance in response to the company delaying drivers’ start times. Union persistence led to the recent ruling and a remedy of $1.6 million for approximately 1,100 members at UPS centers in San Francisco, Menlo Park, and San Bruno.

“Local 2785 is pleased to win this arbitration ruling against UPS, protecting our start times and getting the penalty,” said Joe Cilia, Secretary-Treasurer of Local 2785. “UPS was wrong and the union held their feet to the fire. It was a long battle, but we never gave up.”

Although the company paid the delay penalty at the beginning of the day, it did not pay the delay caused at the end of the shift when the workday was lengthened past the normal quitting time. The union charged the company with violating Article 22, Section 2 of the Northern California Supplemental Agreement.

Ultimately, the arbitrator agreed with the union, requiring “that the Drivers be paid both a 1.5x delayed start time penalty and 1.5x overtime wages beginning at their regular quitting times on the same day.”

Even after this ruling, a secondary conflict arose over the remedy, with UPS complaining that it would be impossible to go back and calculate what the members were owed. The company also wanted to exclude anyone who had since quit or retired before the settlement was reached. The local held its ground and got UPS to pay all members who were on the payroll regardless of their current status.

“This has been a long, hard fight,” said Business Agent Troy Mosqueda. “We showed UPS they could not get away with taking advantage of us and violating our contract. It makes me proud to be a Teamster.”

“This is what it means to be a fighting union that goes to bat for its members at UPS and digs its heels in until victory,” said IBT General President Sean M. O’Brien. “I congratulate Local 2785 leaders and members for their perseverance and clawing back $1.6 million from UPS’s greedy hands, putting it back in the pockets of the members who rightfully earned it.”

Beyond Local 2785, the victory extends to all 15 local unions under the Northern California Supplement as UPS is required to pay all delayed start times in accordance with the arbitrator’s decision. 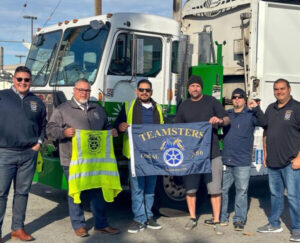